These were the most common questions I got asked after coming back from Japan.  So I’ll do my best to answer these questions below in Journey to Tokyo (2017)…

“How was your trip to Japan?”
Finally back home from my trip to Tokyo, Japan, I’m able to sit down, edit, relax for a bit, and write about how fun this trip was.  This was my 4th time traveling to Japan, but each time is a different adventure with different people.  Traveling alone is more convenient, but with more people, it’s a lot more fun… in my opinion at least.  So my first advice is to find a person or group to travel with!

Is it possible to get around Japan without knowing any Japanese?
It is most definitely possible if I can do it.  I know as much Japanese from watching Dragonball Z to One Punch Man… and that’s mainly from reading english subtitles.  Restaurants have an english menu or ‘eigo menyu‘ for people from the states.  If you’re feeling adventurous and want to try eating out at small bar and grills, they might not be as accommodating.  You might have to point at something and guess what it is… you could end up with a live octopus.
Google maps app will be your best friend as well as the Translate app.  So download it if you don’t have it.

Is public wifi available everywhere?
Most places have wifi, but I would recommend getting a mobile wifi unit from the airport.  There are several places to rent from and the price of unit ranges from data speed to length of rental.   I opted to rent fastest speed with unlimited data for 7 days.  The cost was $62USD.

Some people like to plan and some people don’t, but for me, I just like being ready for anything and everything in any situation.  I used a previous trip to Tokyo, Kyoto, Hiroshima, etc. as a template and updated things I wanted to do.

This is just an hour by hour itinerary around Tokyo area.  If you want to see the full itinerary, just click on the photo.

The itinerary is pretty intense so don’t get too overwhelmed.  My brother, David, is a professional traveler so I kinda learned from him.

“So how much did the trip to Japan cost you?”
Booking airfare was probably the most expensive part of this trip for me but not by much.  I booked through a third party site, Vayama.com, and found a flight from LAX to Japan for $530 in November 2016.  Deals usually pop up on sites like Escape Houston.  Now, I just needed to get to LAX from HOU.  Southwest was having a $130 round trip sale on domestic flights, so I just used my Southwest points to cover the fare and just pay the $11 fee.  These are prices after taxes and fees.  @shihtake tagged along from Houston this time around and we got an Airbnb for 7 nights.  The total was $245 split between the two of us.  After fees, we each paid around $130 each.

Our Airbnb in Akasaka…

An exterior view of our Airbnb apartment as school children pass by.

People think you have to bring $2000USD in cash because Japan is expensive, but the exchange rate favored USD this time around.  By the end of the trip I had spent about $400USD (which covered food and trains) and $62USD for the mobile wifi.

This was the interior of our Airbnb apartment or ‘flat’.  Only one bed with a blanket and a floor futon couch kinda thing.

I actually arrived one day earlier than Joseph aka @shihtake, so I met up with another friend, Enrique or @sargy2, from Virginia.  The plan was to just relax and sight see until Joseph flew in.

Views from the flat.

These vending machines are almost always convenient because they’re almost on every block.

Architecture design in Japan is amazing.

It was early in the morning so I had to stop by for an espresso.

Enrique doesn’t drink coffee so this was his first cappuccino. 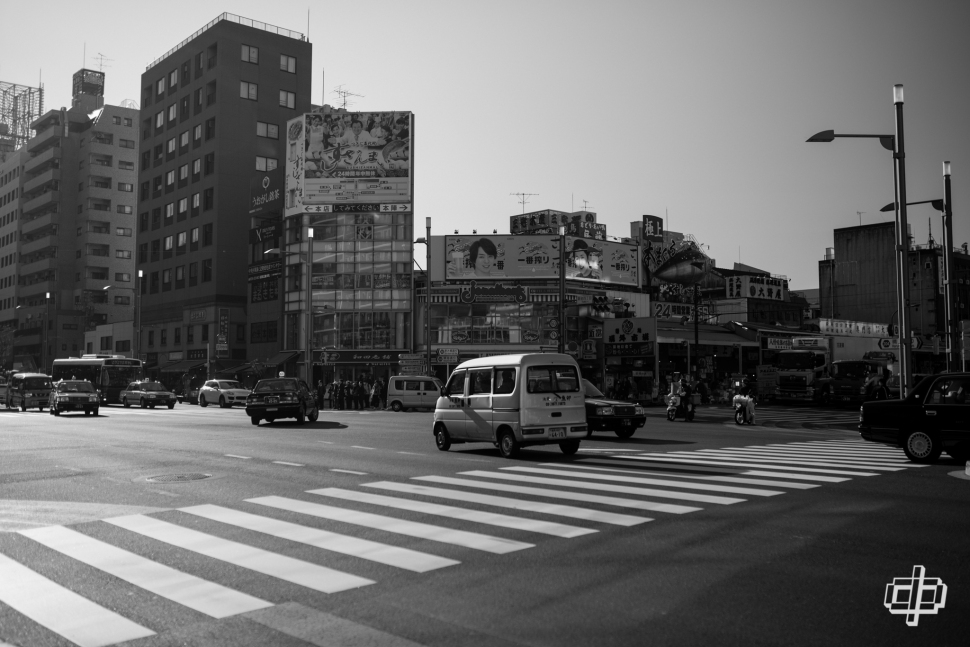 The weather was cool and chilly.  Not freezing.

You know you’re close to Tsukiji Fish Market when you start seeing signs with fish.

We arrive around 9:30 AM which is mid day for shops.

It is always packed with people and tourists though so don’t be surprised if you hear someone else from the states.

I can feel we’re getting near the fish market now…

You would pass by a bunch of sushi shops with lines outside the door.

This is kinda like a farmers market except they’re for seafood.

A view of the Tsukiji Fish Market from a random parking garage we found.

This was the fish wholesale market after 10AM.  It’s pretty much end of their day so it’s not as crazy.

You could sign up to watch the tuna auction, but you would need to wake up at 5AM to stand in line for access.

There were actually 2 queues…  One for Sushi Daiwa and Sushi Dai.  The wait time was somewhere between 1 to 3 hrs…

We got a little hungry so we got some quick street food.

It was rice, salmon sashimi with fish eggs on top.

After Tsukiji, we decided to go to the Bunkyo Civic Center in Byunko district…

The views aren’t too bad for the cost of free…

Awesome views because you can see Mt. Fuji.

This old man is probably explaining some Japanese history…

Enrique taking in the views…

This is it for Part 1 of Journey to Tokyo (2017).  If you have any questions, just post a comment or email me!  As always, thanks for reading.